Can We be with Nature Wilderness with Mindfulness, Equanimity, Patience and Ease?

I remember my first backpacking trip on my own. I wanted to go and I felt afraid to be on my own. At the time we lived in New Hampshire and I took an early autumn trip into the secluded Pemigewasset Wilderness area in the White Mountains. I decided to go to an area called “Seven Falls” where there was a confluence of seven rivers merging together. 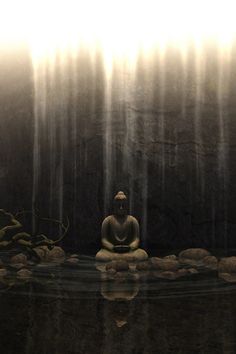 I had been doing a fair amount of hiking and backpacking prior to this time and my body had gotten stronger during a summer of three separate mountain trips in the Western Rockies I had been hiking often with a pack on my back and camping under the stars. I had fallen in love with the mountains, their pristine beauty, rugged trails, meadows embedded with wildflowers, spire top mountains, marmots, Blue Spruce and Douglas trees rising vertically up into the blue skies. I felt more confidence in my abilities to function, set up camp, and walk a fair distance but the thought of time alone in an unknown vast area made me uneasy.

As the time got closer I realized that disquiet settled around just being present with me and what was around me. I did not know how to be with myself and what was around in quiet when I was alone. I did not know how to be. I had just learned meditating in nature and I did not trust myself to stay with what was happening without spinning out into myriad thoughts- Papancha. And I wanted calm and equanimity badly because my whole life, the fear of being alone had always been an issue, abandonment.

I was in awe of nature herself. From my time observing and being in the wilderness I felt a respect and personified the elements around me in ways that they became teachers to me- I felt that they could just be what they were or what later I called “beingness” and the Buddhists call “suchness”. A presence was embodied in these natural beings and forces that could just be with things- the way the tree bent in response to the wind and water; the way the water fell and was shaped in rivers by rocks, inclines, canyon walls, simply being responsive. The endless shapes and forms of boulders, massive rocks and mountains that seemed to be etched with pictures, faces, engravings of lifetimes of living, a history dwelling within it that was wise. I wanted these attributes for myself, as well. I wanted to feel equal.

So as I walked the nine miles to my destination through hardwood forests, with leaves turning yellows, oranges and reds in a still habitat where I viewed vistas of distant, majestic peaks. I began to form in my mind a vision of what could bring me closer to my longing. On Saturday I would find a place to sit and be, where I would not move until I felt the urge to move no more. I realize now that this was a letting go, a surrendering into what was.

Friday night I felt uneasy as I pitched my tent, cooked and ate my dinner, and sat outside in the quiet howling of the evening. The unknown sounds scared me and I decided to take refuge in my tent. I spent the night being nervous about a mouse that seemed to be running about my tent.

When I awoke the next morning there was a sense of excitement as sat myself with tea cup in hand in a level place on rocks and boulders in the midst of the convergence of streaming rivers that was to be my temporary home. After a while I made breakfast and ate reveling at the gurgling, rippling sounds of water- running through my body with streams of tickling happiness alive in me.

After cleaning up I surveyed the landscape looking for a good place to sit for the period it might take “Till I know longer felt the urge to move”. I had some snacks and water with me as sat down on my camping pad and began to settle in. I was sitting open eyed, just receiving all the sights, smells, sounds, and touches until I found a focus to rest my eyes. A place within the large boulders seemed to keep catching my attention and as I gazed my eyes softly a figure began to take place and eventually took the form of a woman, a young female mother- like being that simply looked back at me.

I spent hours there letting my eyes rest upon her and at time gazing around noticing the birds that landed in the water, drinking, singing delightfully in the cascading water. Everything felt so alive. I had to keep adjusting my body position to adapt to sitting in one spot for hours. The longer I sat with determination to be, my thoughts began to drop away, my body became more restful. Softly gazing my eyes upon the mother figure took less effort and I could feel a quieting inside. I felt at home, welcome, the uneasiness was no longer an issue that I kept recirculating in my mind. I felt content, there was nothing I wanted to happen and nothing that needed to be pushed away. An amazing insight of feeling blossomed “I had every right to be here”. I felt myself lingering, deeply content- this mother figure my companion, an ally, a benefactor of sorts. I no longer had the urge to move! Wow. As soon as I perceived this, I then gave my permission to move. And soon I was hiking up the trail looking over high vistas, just playing, enjoying. Then I sat down and just took it all in. A feeling of deep nourishment, a trust in myself and the benevolence of the natural world entered me.

Nature and my own intention had shown me truths about patience, slowing down, paying attention, impermanence, gratitude, letting go, absorption, being still, concentration, effort, mindfulness, meditation and a taste of cessation.
I have relearned these truths many times because we remember and we forget. I know that this is a place I can always return.

“I only went out for a walk and finally concluded to stay out till sundown, for going out, I found, was really going in.” — John Muir, The Wilderness World of John Muir